Homes for Sale in Windsor, Ontario 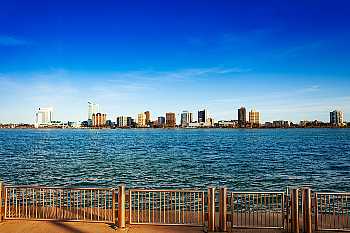 Windsor, Ontario is the third-largest city in Southwestern Ontario. It’s population of 217,188 puts it behind Kitchener and London, Ontario for the top spot. Windsor is an incredibly diverse city and its real estate is no exception. There are homes, apartments, condos, and commercial properties for sale in a variety of districts all over the city. Some areas of Windsor are commercial-oriented, trendy, and historic, while others are classic suburban neighbourhoods filled with trees and community parks. Whatever your needs, Windsor real estate has the solution.

Homes For Sale In Windsor, Ontario

The housing market in Windsor has been steadily increasing in recent years. Between 2018 and 2019, the average home price has increased by about 8%. The average homes in Windsor for sale sell for about $320,000 dollars, but this number largely depends on the real estate market in a given area. Houses in Windsor can sell for under $100,000 in older areas, while lakeside and other premium properties can sell for multi-million dollar sums.

In the past, Windsor was a lot smaller than it is now. Over the years, for one reason or another, Windsor has picked up a lot of acreage from nearby townships. Now, Windsor covers 146 kilometers squared and many of its previous neighbours have become neighbourhoods within Windsor.

Moving slightly East is Walkerville. This historic district was once its own town, built up around Hiram Walker’s distillery - famous birthplace of Canadian Club Whiskey. To this day, Walkerville remains a cultural phenomenon in Windsor. It is the trendy food, arts, and culture district of the city. From rave-review, hole-in-the-wall restaurants, to shows at the Olde Walkerville Theatre, Walkerville is where the fun is. Homes in Walkerville are older, but there are plenty of bungalow starter homes and multiplex investment properties lining the historic streets.

Even further East is Riverside, aptly named considering just how close some of the properties in the neighbourhood are to the Detroit River. Riverside is a popular residential area with newer housing developments available as you move further into East Riverside.

South of Riverside is Forest Glade, an older neighbourhood. Development here finished in the 1980s, but it has since maintained a reputation as a nice family area. It boasts access to both the Catholic and Public School Boards, a community centre with an ice rink, as well as numerous parks and trails to enjoy the great outdoors.

Kicking off the tour Westward are Fontainbleu and Devonshire Heights. The older of the two, Fontainbleu has great access to the conveniences of Tecumseh Road East while the slightly further South Devonshire Heights has some newer developments including the Devonshire Mall, the largest shopping centre in Windsor. Both neighbourhoods are primarily residential, dominated by single family dwellings and well-serviced by schools.

Living in Windsor, Ontario means living in a pretty unique place. Geographically, Windsor is the rare case of a Canadian city being further South than an American City - in this case, Detroit, Michigan.  Windsor’s cultural diversity also sets it apart. During the Summer “Festival of Nations”, 16 distinct cultures set up a village to share their flavor, country, and expression with the city of Windsor. Windsor’s history is rich as well. Since it is the whole of so many parts, each area in Windsor has its own independent town history. Enthusiasts can partake in a walking tour of historical Sandwich, Ford City, Walkerville, Riverside, and Ojibway to learn the identity of the areas outside of Windsor.

Windsor is never short on activities and amenities, either. One of the reasons it is so popular is because there are entertainment options for all ages.

While Adults can experience

Outside of Windsor, Detroit, Michigan is actually its nearest big-city. By crossing the Ambassador Bridge or the underwater Detroit-Windsor Tunnel, the American automotive capital is about 20 minutes away. Detroit has a lot to offer day-trippers including the Detroit Zoo, the Detroit Institute of Art, the Motown Museum, and a sporting arena for any professional team you can think of.

Gearing up to buy or sell a home soon in Windsor? Contact Team GateKey at Contact Us
Team GateKey is here to help you navigate the Windsor real estate market.

Check out this rare opportunity in the area! A beautiful ranch sitting on a huge lot with a 3-car garage, and ample land for many uses. This recently renovated home offer...

WELCOME TO 960 PIERRE AVE! PRIDE OF OWNERSHIP IS VERY EVIDENT IN THIS HOME. SITUATED IN HIGHLY SOUGHT-AFTER WALKERVILLE, JUST OFF ERIE ST. THIS 1 1/2 STOREY CHECKS ALL TH...

YOUR SEARCH WILL BE END IF YOU LIKE TO BUILT A DREAM HOUSE IN THE HEART OF WINDSOR, THIS VACANT LOT LOCATION IS VERY CONVENIENT, CLOSE TO, WINDSOR REGIONAL HOSPITAL(OUELL...